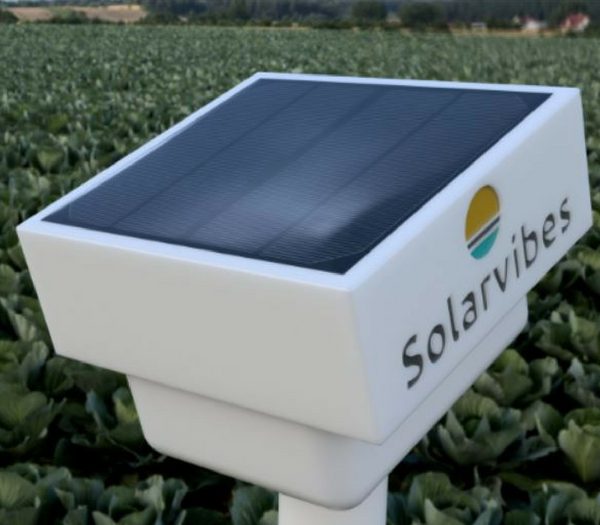 The startup’s main product is Agrimodule Smart System, a solar-powered plug and play device with integrated machine learning. It can be controlled remotely (via smartphone, laptop, etc.) and automatically. Agrimodule Smart System helps farmers plan and manage their farming operations – from crop rotation and soil fertility planning, to pest, disease and weed control, and more.

The device can be retrofitted with various electric, solar or diesel pumps to cut down energy consumption for at least 30%.

AgriModule Smart System is a true plug and play device powered by the solar energy. This device has artificial intelligence that allows it to monitor crops 24/7 and record crop specific information at various stages from pre-planting through harvest. It also acts as a farming assistant, and comes with audio guidance for inexperienced farmers.

This is an end-to-end solution for farmers to effectively manage their operations. It includes the following core features:

Solarvibes started off as a project. The challenge was to design a precision farming tool that delivers proven value in diverse farming systems, targeting primarily India and African countries. They have built plenty of early momentum on their Adopt a farmer campaign, one of the 10 most funded campaigns on KATANA reward crowdfunding platform.

…Our vision is to empower farmers and lead the transition towards tackling the biggest problem of this century, the “Energy-Water-Food” nexus…

The goal of this campaign was to provide farmers with the AgriModule Smart System, seeds, as well as adequate training, thus creating initial traction and validation. During the campaign 50 farmers have been “adopted”, with backers coming from 12 countries.